One of the goals of jamovi is to make more sophisticated analyses accessible to a broader audience. A great example of this is the GAMLj module introduced here. If you’ve never used these models before, hopefully today I can convince you that with GAMLj they are within your reach, and that there are advantages to using these instead of more traditional analyses, such as repeated measures ANOVA.

For more technical readers, here is a feature list:

If that feature-list seems a bit overwhelming, it might be easier to think “GAMLj does a lot of stuff”. But don’t be put-off, GAMLj is suitable for beginners and advanced users alike.

So the repeated measures ANOVA is something of a staple of the social sciences; it’s one of the most used tests. Unfortunately, it has the drawback that it cannot handle missing values – if any of the subjects in your data set have missing values they are excluded completely. It’s like they never participated in your study. This can be a real problem with the smallish sample sizes common in the social sciences. Fortunately, linear mixed models provide a simple alternative to repeated measures ANOVA, which is able to make use of these participants’ data. That means more power, less time spent collecting data, and better use of tax-payer’s money. What’s not to love about LME’s?!

GAMLj requires the data be in long format. It needs to look like this: 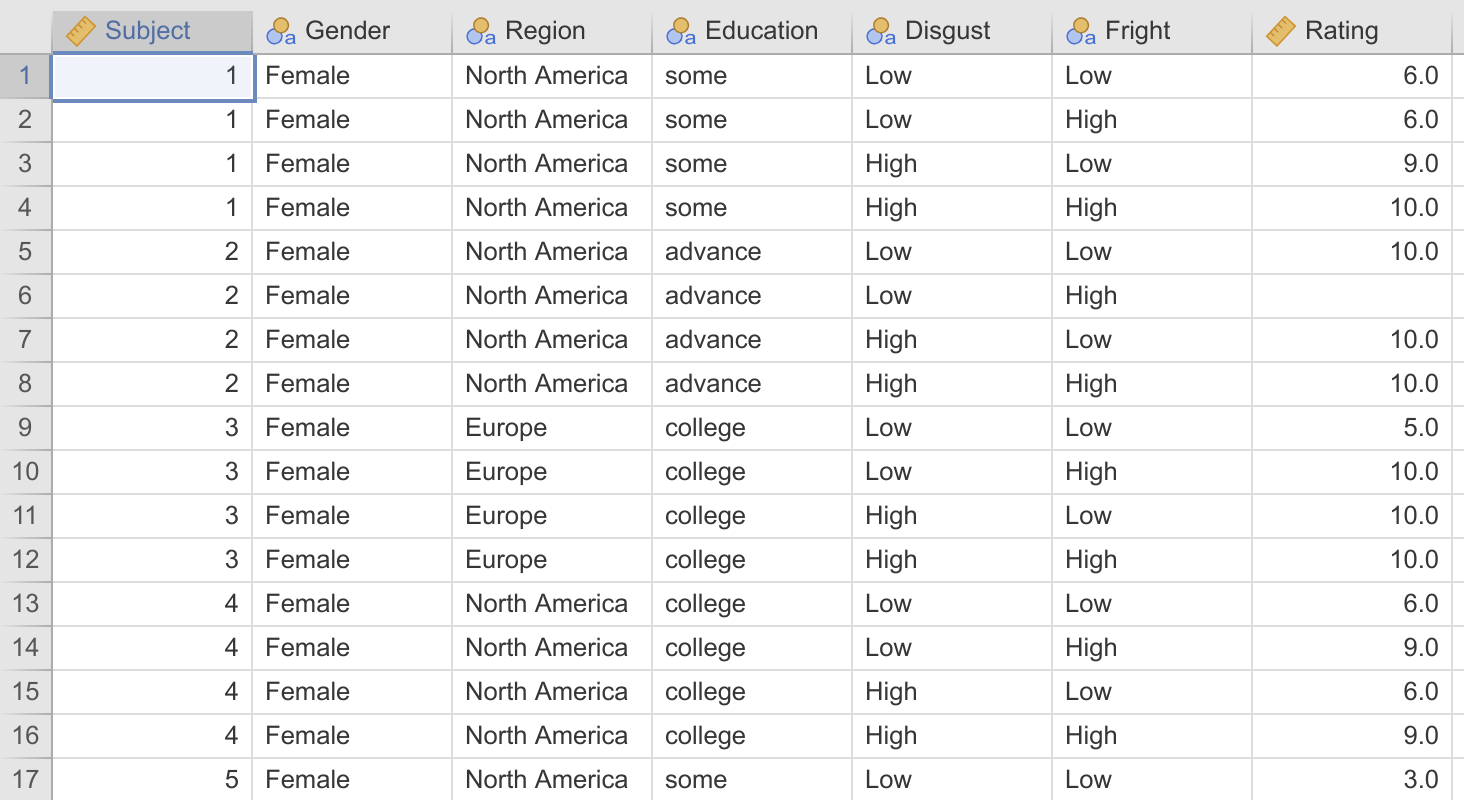 In fact, the bad news keeps getting worse, because jamovi currently doesn’t provide a facility to convert data between wide format and long format (the jamovi developers assure me this is in the works). So if your data is in wide-format, you’ll have to convert it to long format in a different piece of software before importing into jamovi. I’ve done that for you here – the Bugs data set in long format.

Hopefully the first thing you’ll notice is the missing value in row 6 – this participant would simply be excluded in a repeated measures ANOVA.

The Bugs data set (Ryan, Wilde, and Crist, 2013) contains ratings from people about how much they want to ‘get rid of’ a variety of bugs, each classified as being high or low on “Disgustingness” and high or low on “Frighteningness” (for example, a maggot is disgusting but not frightening, and a wasp is frightening, but not disgusting – see the paper for details (it is a little bit amusing).

Now let’s analyse this data set with GAMLj. If you haven’t already, install GAMLj from the jamovi library. This is available to the top right of the Analyses tab. Once installed, a new ‘Linear Models’ entry appears alongside the other analyses. From this we can select ‘Linear Mixed Models’. In this example, Rating is our dependent variable, and Disgust and Fright are our factors, and we can just drag these into place. However, we need to tell GAMLj which of these observations belong together, or belong to the same subject – we do this by specifying the ‘cluster’ variable, in this case Subject.

We can see that the co-efficients for the effect of Fright () and Disgust () vary across participants (there is one coefficient and one for each participant j). This captures the correlation between the repeated measures in the design. But we are still interested in the overall effects of Fright and Disgust, so the equation also features the fixed effects of the factors, and , which can be interpreted as the average effects of the factors, averaged across the random effects.

Hopefully this table jumps straight out at you. It looks like an ANOVA table after all. They are the fixed effects, and we can interpret as fixed effects of a classical ANOVA. From this we can see a highly significant effect of Fright and Disgust, but a non-significant interaction.

We can compare these results with what we’d get with a repeated measures ANOVA:

Let’s plot the means for each: 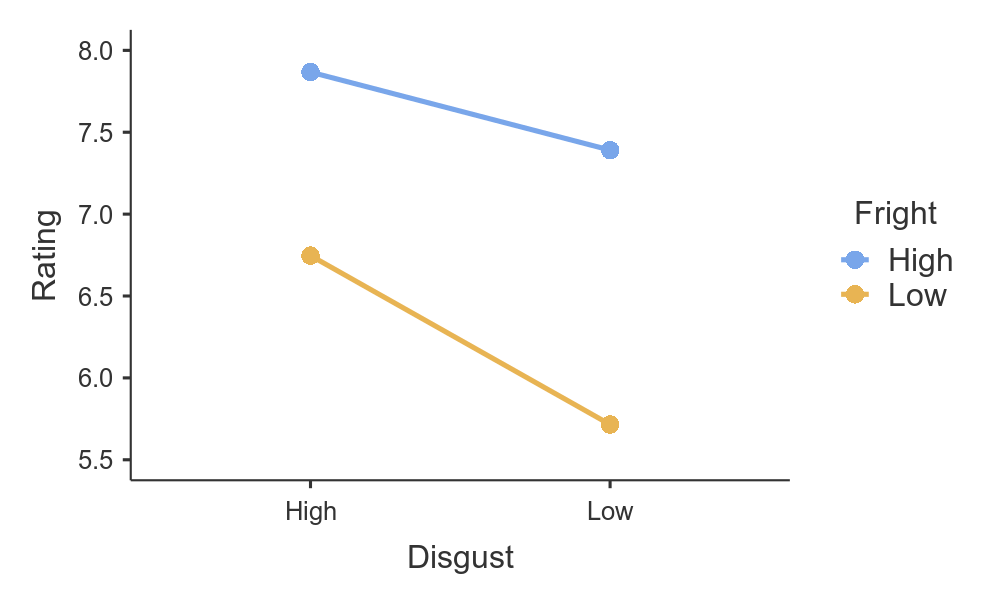 It seems people do want to get rid of highly frightening insects and highly disgusting insects more than others.

But we can do more than just visualise the marginal means of Fright and Disgust — by checking the random effects box we get a plot of the estimated effect for each subject.

So there we have it, an LME equivalent to Repeated measures ANOVA. Hopefully you can see how approachable these models can be, and that this class of models can become a part of your statistical toolbox. For more examples of Linear mixed models (and General linear models, and Generalised linear models), head on over to the GAMLj docs.